“In the deportation of radicals after the Red Scare, of April 1921, Mencken reminded his readers that “probably two-thirds of those allegedly Reds were wholly innocent, and even the guilty ones were not fairly tried.” Though by no means sharing the views of Eugene Debs, Mencken opposed the jailing of the Socialist leader, imprisoned for his Marxist views and for opposing the war. Mencken also corresponded with Emma Goldman, the deported anarchist writer known as “Red Emma.” Mencken called on the Bureau of immigration to allow her to return to America to visit her relatives and then sent the Emma Goldman Recovery Committee a check for $25.” (Rodgers, Mencken: The American Iconoclast, (NY: Oxford University Press, 2005), p. 217 ) 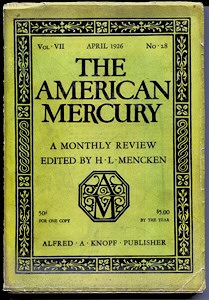 Eighty-seven years ago subscribers to the American Mercury were receiving the April number of the magazine little knowing that 2,943 words occupying not quite four-and-a-half pages would create an anti-censorship tempest-in-a-teapot. The banning in Boston of the article titled “Hatrack” made the front page of the Sun but was sent to pages in the mid-twenties in the newspaper of record, The New York Times. Herbert Asbury’s piece was a chapter from his forthcoming book Up From Methodism and was a reminiscence of evangelists’ efforts to protect the citizens of Farmington, Missouri (Asbury’s boyhood town in St. Francois County, 60 miles south of St. Louis) from harlots; the last part of the article described a prostitute nicknamed “Hatrack”, “a scrawny creature” who “when she stood with her arms outstretched she bore a remarkable resemblance to the tall hat-racks then in general use in our homes.”

Herbert Asbury came from a religious family: his uncle, grandfather and great-grandfather were ministers and bishops of the Methodist Church. Asbury also claimed that Francis Asbury (1745-1816), “the patriarch of American Methodism’, was the half-brother of his great-great-grandfather (though Dr John Wigger, University of Missouri-Columbia, says in his American Saint (2009) that “this is unlikely”).

Perhaps the familial strain of devoutness had exhausted itself by the time Herbert Asbury was born on September 1, 1889. He, his sister and two brothers lost the faith. In the chapter “Conclusions From a Man Gone to the Devil” in his book Up From Methodism (NY: Alfred A. Knopf, 1926), Asbury wrote that “I find myself full of contempt for the Church, and disgust for the forms of religion. To me such things are silly; I cannot understand how grown people can believe in them, or how they can repress their giggles as they listen to the ministerial platitudes and perform such mummeries as are the rule in all churches.”

His choice of profession was the antipode of the high-minded concerns of his devout forefathers: he turned to journalism and concerned himself with very low life: true crime, scandal, prostitution, mayhem, gang fights, rum-running, murder and the underworld. In 1928 his The Gangs of New York: An Informal History of the Underworld was published. In 1979, film director Martin Scorsese acquired the screen rights to the book. The film Gangs of New York was released in 2002 but was so fictionalized that Asbury’s book only served as an “inspiration”. Asbury retired from writing in 1950 and died thirteen years later, on February 24, 1963, in Manhattan’s old University Hospital which stood at the corner of 20th Street and 2nd Avenue.